Menu
Back to Ancaster Township Cemeteries

Marx Binkley (1745-1805), the first member of this pioneer family to settle in the area, purchased several lots in Concession 1 from Jemima, Sarah and Mary Johnson in the late 1790s. He set aside a small portion of his land and started a family burial ground in 1803. His own burial in 1805 was one of the earliest known Euro-Canadian interments in the Hamilton area.

The cemetery was in family use until the mid 20th century when the last burial took place. It is now owned and operated by the city.

Marx Binkley (1745-1805) and his family came to the Ancaster area from Lancaster County, Pennsylvania in the late 1790s. He established a family burial ground in 1803, and his 1805 gravestone in one of the oldest in Southern Ontario. His gravestones has an unusual epitaph:

Beside him is buried his wife, Matelena, who died in 1838. 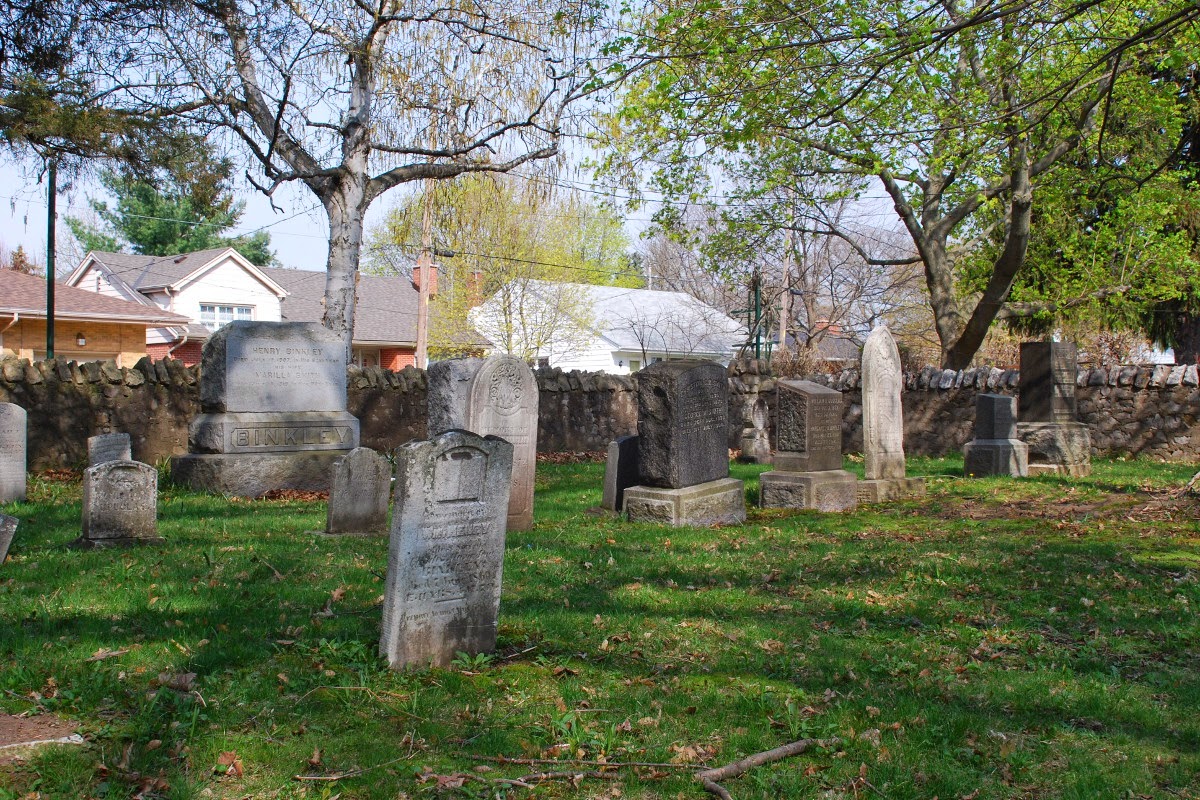 Henry Binkley, a grandson of Marx Binkley, established this family burial ground in 1852. The oldest gravestone is that of his father William Binkley (1784-1852).Lots 53-57, Concession 1 were originally granted to Jemima, Sarah and Mary Johnson in May 1796 and purchased by Marx Binkley who arrived from Lancaster County, Pennsylvania in the late 1790s. Upon Marx Binkley’s death in 1805, the property was divided between his three sons; John, George and William. With the death of William Binkley in 1852, his son, Henry set aside part of the property for a family cemetery. The name of the cemetery comes from this donation of land by Henry (1826-1907), who was a major figure in Ancaster politics, and served as 2nd Deputy Reeve of Ancaster Township in 1876 and 1877.

The site has remained a family cemetery, though it is now closed and maintained by the City of Hamilton.

Johann Marx Binckley came with his family to Wentworth County, Ontario (Upper Canada) in 1800 (some records say 1798). There were a number of families in the party, including George Kintzel’s family and David Baringer’s family (whose daughters later married Binkleys), a child Sarah Binkley who may have been a third daughter or an “adopted” daughter and possibly Nancy Gingerich’s parents and family (or at least her brother David). If the Gingerich family was part of the group, they went on to Waterloo County as originally planned. ( Some records say they came in 1800 and others say David came to scout out the County in 1800 and then brought the family in 1801.)

In their Conestoga-like wagons and with all their animals and goods, they forded the Niagara River at “Black Rock” where there had been a large sandbar. Marks paused to visit a friend, Abraham Horning, who had come to Wentworth County the year before. After viewing the beautiful valley from the “mountain” brow, Mrs. Binkley convinced her husband to settle there too. In 1800 he purchased almost 1000 acres of land between what is now Ancaster and Dundas (Concession 1, Lots 53, 54, 55, 56, and 57 in Ancaster Township) from three sisters Jemima, Sarah and Mary Johnson – daughters of Brant Johnson of the Indian department. The property lies where present day Highway 2 meets Highway 8 – on all sides of the highway. For many years this area was called “Binkley Hollow” or “Binkley’s Corners”.